It has been quite a year for Dave Munro's Haddington team who successfully defended their Knockout Title.  Would Dave also manage to win the Elco Cup in back to back years ?

The answer was NO !  What team would pip him to the post ?  None other than the Haddington 2 team of James Logan, Colin Baird and the farther/son duo of Morgan and Sandy Nicoll.

Haddington now edge further into the lead with 22 Bonspiel wins (since 1859) ahead of Athelstaneford's 15 wins. 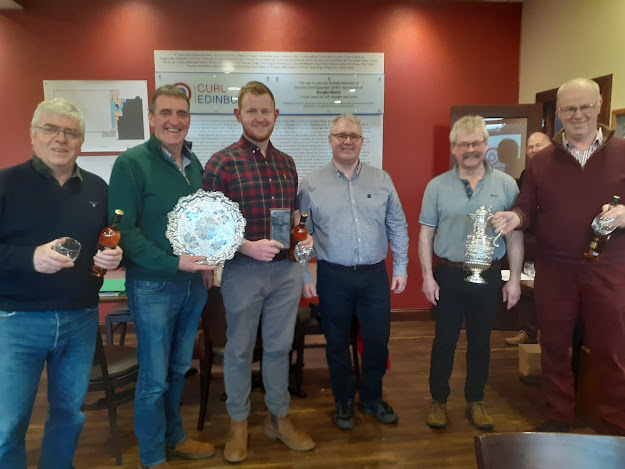 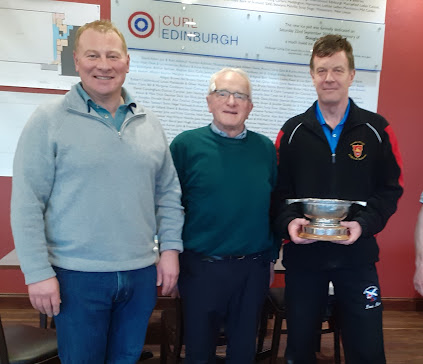 They scampered past Athelstaneford in the first round then, in back to back sessions, Dirleton and East Linton.  This brings Haddington's wins to 12 (since 1995) with the nearest rivals, Athelstaneford, sitting on 7 wins.  This is the first time that the title has been successfully defended since Athelstaneford's four year run from 2012-16

Let's hope that in next years Province Finals, Haddington can finally get out of the round robin phase ! 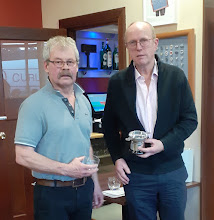 Congratulations to Robin Aitken and Paul Neison from East Linton who win Nicoll Trophy as winners of the Province Pairs Competition.  This win elevates East Linton into second place in the overall table, being the only club other than Athelstaneford to lift the trophy more than once.

As consolation, the Athelstaneford pairing of Johnny Shedden and Frank Ross take home the Doo'Cot Trophy as Low Road Winners. 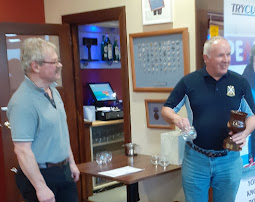 Despite the much improved draw, I'm afraid Haddington haven't managed to qualify for the knock-out stages of the Province Championships once again!
First game on Friday was against the local Renfrewshire Province represented by Paisley St Mirren Club. Despite having to cope with very different ice from Murrayfield we took a 3 at the second end to lead 3-1. Unfortunately that was the end of the good scoring from our point of view and duly allowed Paisley to score a 3 back, followed by another 3. An end where gambling took over went against us and we conceded a 5 so were now 12-3 down and game over - final score was 14-4.
Second game against Forfar from Angus Province - they had a sub filling in and that poor soul had noted the wrong timing and turned up 45 mins late! We won by default with 6 shots and 5 ends I believe being the benefit as well as 2 points. This at least meant we had something to play for on Saturday.
Third game was played on the Saturday against a strong Kilsyth team from Stirlingshire Province. Once again we started really strongly, taking a 3 at the 1st and stealing 1 at 2nd end (maybe super-sub Hamish Logan doing the trick!). Then, once again, our bubble was burst with some missed strikes allowing Kilsyth to take a 4 and level the game at the 3rd. They then proceeded to steal a 2 and, although a saving draw to the 4-foot gave us a 1 at the next, we lost a 3 and a 2 to trail 11-5. The last end saw us taking a 2 but too little, too late with Renfrewshire beating Angus in the other game allowing them and Stirlingshire, as unbeaten group leaders, through from our group.
Good experience for all but a lot of chances not taken meant quite a frustrating weekend for the Haddington CC team. Yester qualified from their group and I've asked Balfour to give you an update of their achievements which, at time of writing I don't know.
D.M.
Posted by Graeme at 06:32 No comments:

A correction has been made to the previous winners of the Knockout.  Thanks to Former President Dave Munro for spotting.

Payment by club to be either by cheque on the day or by bank transfer in advance.

The draws for our Province competitions has now been added.

Please note. there is a team slot available for both the Pairs and the Knockout Competitions.  Should anyone wish to play or make up a team, please contact the President/Vice President or Secretary.