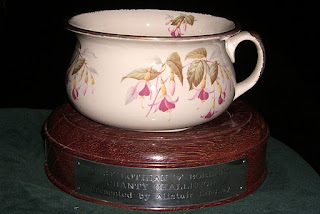 The day dawned bright but storm clouds were looming over the hills as our brave 16 lads and lassies set off to Kelso.  This year we were the hosts although the match was being held on Borders territory.  The Borders won the trophy last year although when we faced them in last seasons Waldie-Griffiths we were the narrow victors.  All was set up for a tight battle....... and tight it was.
We had been given warnings about 'tricky' ice and 'tricky' stones and the ice did seem to change character every end, so it is perhaps no surprise that the Borders got off to a flying start, after four ends we were trailing 17 shots to 6 i.e. 9 shots down.
During the fifth end our skips seemed to get the hang of the ice and all four teams took the end, boosting our tally by 11 shots and putting us 2 shots up.
The sixth end was one of consolidation and saw us increase our lead to 6 shots.
It was then that the Borders staged their fight back, winning the end by 9 shots to 2 and giving the lead back to the borders, at the last gasp, by 1 shot........
But all was not over, because one match went on to play an eighth end.  A nail biting finish saw Ken Burchell, with the hammer, facing facing a final shot, lying one shot against and partially covered.  A stroke of brilliance saw him remove the Border's stone and sit with two of his own.
The final score was then East Lothian 28, Borders 27...... A win by 1 shot on the final stone of the final end.
Some say that Ken should be declared the 'Man of the Match' for his cunning quick play and final stone.  It should be noted, however, that of the four games, East Lothian won one and lost three.  Our only winning skip was John Good, aided by Dale Callander, John Black and Frances Donald and their 10 - 2 win was decisive in the teams overall victory.

The championship was followed by some 'short' speeches and some 'long' banter over a splendid carvery laid on by the local caterers.

The rain was lashing down on our way home but the moon was shining brightly over East Lothian.  This was probably more to do with astrological conditions than our curling though..... but it was still nice.
Posted by Graeme at 02:49