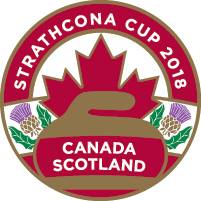 You are halfway through your tour. Bonds have been made; characters sized up. You are playing for the Strathcona Cup, a trophy that dates back to the very early 1900s, to the very first tour that the Canadians made to “the shores of Auld Scotia” back in 1909.

It is worth reflecting on the trophy for a second. It was presented to the Royal Club for competition between the Canadians and the Scots by Sir Donald Alexander Smith, 1st Baron Strathcona and Mount Royal, a Scotsman who had a foot in both camps, for he was the Governor General of Canada and spent many years living on the other side of the pond.

Let a writer of the time describe the cup. “To this great arbitration (the test matches during the 1909 tour) keen zest was added by the presentation of the noble President, Lord Strathcona, of a handsome Challenge Cup …………. and which it would be averred is without a superior among curling trophies at home and abroad. This splendid trophy, which was selected in competition from a number of designs, is cup shape in form, with two handles. It measures about 20 inches in height and 14 and a half inches in diameter. The decoration, which is chiefly Celtic in character, is artistically applied. A band of Runic entwined work and circles the upper part, and is continued on the handles, whilst round the top is the wording in applied letters: ‘Presented by Lord Strathcona and Mount Royal to the Royal Caledonian Curling Club’. On the silver octagonal base of eight panels there are representations of a Scottish curling scene, a Canadian curling scene, and also views of Edinburgh and Stirling castles. Additionally other panels show a beaver, a maple tree and a scotch fur with a thistle in the foreground. Two panels have been reserved to inscribe the winners (sic) names and the other the inscription, which coupled with the inscription that the rim of the cup reads “Presented by Lord Strathcona and Mount Royal to The Royal Caledonian Curling Club to Commemorate His Presidency of the Club and of the First Visit of a Canadian Curling Team to Scotland, January 1909”.

To the best of the author’s knowledge, it has never travelled furth of Scotland, being considered too valuable an heirloom to escape the vaults of the venerable Edinburgh jewellers, Hamilton and Inches, save for the odd local foray when the Canadians come a-calling every decade or so. It is a magnificent trophy.

The 2018 Canadian tour has split in two with half going north and the other half going south. There will be daily contact between the two tour captains each anxiously awaiting the progress of the other and together totting up the scores of the day’s play and adding them to the cumulative tour totals. Ends matter not a jot! Individual game results are immaterial, so the number of games won comes under the heading “Not a Tittle”! The competition is simple and the winner of the cup is the country that scores the higher cumulative number of shots in their matches. When I was on the tour to Canada in 2003, we had a simple philosophy in our foursome – a philosophy that we eventually got the rest of the east tour (when we visited Canada, half the tour went west and the other half east) to adopt. It went something like this: win big; lose small!

Our issue was simple; the competition was hard-fought and close and the result was in doubt right up
until the last week or so, so every shot counted and “heroic” losses by ten shots or more were to be discouraged at all costs! This resulted in some odd games, none more so than when we found ourselves up against the local hot-shots – soon to go on to represent their club at the province playdowns – deep into the tour. We quickly realised that we were onto a hiding to nothing if we didn’t batten down the hatches quickly, so we were prepared to get out of jail with a three-shot beating, rather than go down big and threaten the chances of an overall victory in the competition. We took the loss on the chin and hit for home from about the third end. The opposition rink wondered what was happening!

All the games are played in a spirit of great conviviality and each club seemed determined to outdo its predecessors in the scale of the welcome and hospitality put on for the visitors. The 2018 Canadians have been sensible though; they have insisted on the odd “off” day, when curling can be forgotten and the whole team can enjoy a spot of extra-curricular activity. Thus, they have found time to be feted in Glasgow’s magnificent city chambers, to visit local attractions and generally to woo the locals – and not just the curlers. They have made friends wherever they have gone – another touring tradition which, I am glad to say, lives on.

Who will win? Well, the answer is really very simple. Everyone wins! Tourists get to see a new country and in some depth; they get to curl on different ice, in different venues and against different people; they make friends – sometimes for life. For the hosts, they meet new people; they wonder at the standard of the curling; they are introduced to something new and different in this great sport of ours. As to the competition itself – and here I speak only for myself – I think it right and proper that the visiting team wins the cup, but only by a small margin and that the result is in doubt until the last couple of days! It pains me a bit to say it, but – Go Canada, Go!