Semi Finals:
Haddington v Aberlady.
Following a mix-up Haddington arrived one man short, after frantic phone calls the fourth player was rustled up but was a full hour late resulting in a 3 shot penalty.  Despite this their very experienced line up was no match for the youngsters fielded by Aberlady, who still performed well.  Haddington ran out the winners with a final score of 12 - 8
Markle v Yester
This proved to be a tight game throughout, with a score in the final end swinging it in the way of Yester.  The final score was 7 - 3

Final
Haddington v Yester
This proved to be a high quality and enthralling game to watch with Dave Munro's Haddington team pitted against Sandy Stewart's Yester rink.  On very swingy ice the lead changed several times as a result of magnificent take outs and draws (even through ports).  Haddington went into the final end 1 shot up but without the hammer but managed to hold the Yester squad to a single to peel the game
5 - 5.  Sandy Stewart went to draw the shot and came up biting the four foot but Dave Munro quelled their silent jubilation by placing his stone directly on the pot lid.  Therefore it is Haddington that will go forward to represent the Province in the National Province Championship Finals in Greenacres in Oct/Nov 2020. 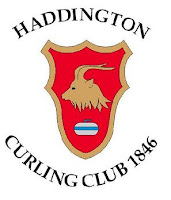 The prizes will be presented after our Province Bonspiel on Friday 17th January 2020
Posted by Graeme at 05:05