On keen and swinging ice, the 1st round of the Province Pairs developed into 4 very closely contested  games. The games were played over 4 ends and after the 3rd end was completed 2 games were tied on 2-2 (Yester v Aberlady and East Linton v Dirleton) whilst on the other sheets Haddington held a slim 2-1 advantage over Doocot and Athelstaneford were leading Markle by the same score. However at the end of the next end Yester, Dirleton, Athelstaneford and Doocot (after a draw shot challenge) had successfully made it through to the high road. In the high road semi finals Yester managed to outscore Dirleton and Athelstaneford accounted for Doocot whereas in the low road Haddington edged out Markle while East Linton saw off the Aberlady challenge.
Both finals proved very interesting spectacles for those upstairs watching.
The low road final took place first and East Linton, skipped by Paul Neison with Emma Hood leading, took a single point at the 1st end but Haddington took the following 2 ends scoring 3 then 2 to lead 5-1 going down the 4th and last end. Although East Linton managed to score 2, the victory and the Doo'cot Trophy was won by Haddington pair Dave Munro (skip) and Colin Baird by a final result of 5-3.
The high road final between Yester pairing of Sandy Stewart (skip) with his faither Balfour leading and Athelstaneford team of Frank Ross (skip) and Katherine Golding proved to be a really intense event. Frank and Katherine were worthy winners last year and weren’t going to lose their grip of the trophy this year without a fight. With single shots shared over ends 1 and 3, along with a blanked 2nd end, everything came down to the crucial 4th end with Athelstaneford having last stone advantage. After the leads stones were played there were about 5 stones crowding the 4 foot circle and the counter lying shot was one of Katherine’s Athelstaneford stones. Try as he might, Yester skip Sandy just couldn’t get past well placed guards and with the same stone still in place after Yester’s last being played, the teams shook hands with Athelstaneford reclaiming the trophy for the 4th year in succession. Excellent curling and fun made for a very enjoyable pairs competition and many congratulations to both winning teams, especially Frank Ross and Katherine Golding for doing Athelstaneford proud once again.
Everyone else should be congratulated on their performances too, particularly Yester who couldn’t have done much more to wrest the trophy away from Frank and Katherine but it just wasn’t to be on this occasion.
Report: - D Munro
Posted by Graeme at 06:11 No comments: 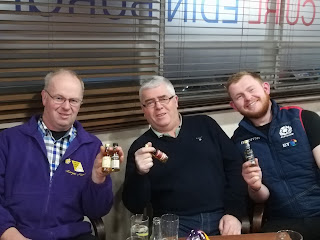 Due to reasons that we wont go into here, East Lothian were unable to defend the Black Bull Trophy.
However a fun 'Draw Shot' Competition was added and this was dominated by one of the East Lothian Teams.  This team was made up by Morgan Nicoll (representing Aberlady) and Colin Baird, Sandy Nicoll (Haddington) John Shedden, Shelagh Main (Athelstaneford), Ian Donald (East Linton) and Ken Burchell (Doo'cot).  Sandy was also the ONLY player to 'cover the hole'
Well done and enjoy your drinks.

As far as the Main competition went, here is a short report from John Good:-


Teams from Midlothian, East Lothian and Peeblesshire Provinces, together with two from the Royal Club proved on 1 December that the Bonspiel format can bring out the best in their curlers.
On the ice they all fought their way through twelve ends, with only a short break to stack brooms, to get their hands on the Black Bull Trophy which dates back more than forty years. The winners would be the pair of teams which had the best shots up total, so getting and holding stones in was the priority for everyone from skips to leads. There was a good draw for in-behind or guard stones as well and some hold for hearty takeouts.
John Shedden took a 5 in one end which helped the East Lothian pair of teams, fellow skip Morgan Nicoll, to finish on +4 overall.
Trevor Dodds and Lindsay Scotland skipped for Midlothian and included ends of a 5 and a 4 to come off the ice also with a +4 outcome.
This year Peeblesshire skips Benny Masterton and Robert Robertson together won ten ends but despite each taking 3s late on, finished down the queue.
Royal Club teams, organised by Area Chairman Calder Benzies and Secretary John Good, together won 13 ends and finished +13, with just enough energy left to put the halter on the Black Bull and take it home till next year.