The two Semi Final games were between East Linton versus Haddington and Athelstaneford versus Yester; last year's winners.
The first session produced a comprehensive win for East Linton over Haddington whilst the other game ended in a peeled game of 6 shots each with a draw shot challenge to follow for the two skips; neither stone needed sweeping and both just held on at the back of the rings to give Athelstaneford the game by the narrowest of margins.
The start of the final had to be delayed as one game had just finished before the bell went for the next session.
In the final Athelstaneford with J Shedden, K Stark, D Scott and B Bowie took on the East Linton rink composed of R Aitken, P Neison, J Black and A McCrone.
Athelstaneford started strongly with a 1 in the first end followed by another 1 in the second end. Unfortunately that was the end of play for Andrew McCrone the lead for East Linton who had to withdraw through injury to his back and the game carried on. In the third end the 3 curlers from East Linton appeared on the board for the first time with a hard earned 1 shot. The game heated up and with some excellent play and they levelled the scores with a further shot in the fourth end. Athelstaneford then stole the lead with some magnificent play in the fifth end; but not to be outdone East Linton bounced back with a 1 to level things in the sixth end, going into what was to be the final end peeled.
The final end saw a number of Athelstaneford stones sitting around the button but a brilliant last stone from Robin Aitken of East Linton nestled against these to take shot. This then left the Athelstaneford skip Johnny Shedden to draw with his last stone to move the East Linton stone and lie to take the end and the game; the stone looked right on track to achieve the desired result but in the end just marginally run out of steam to nestle close to the button but not enough to dislodge the opposing stone.
A brilliant final which was a credit to both rinks and one which the small contingent of spectators thoroughly enjoyed.
Congratulations to Robin and his rink in what was a momentous occasion for East Linton having only won the Royal Bank of Scotland Quaich once before back in 1995 when the trophy was first presented.
Our thanks to all who took part over the three days of competition.
Posted by Graeme at 06:29 No comments: 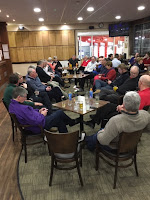