Well done to Bill Gray and his team from Yester who beat Dirleton in this years final.

Belated CONGRATULATIONS to Sandy and his team of John Good, Karen Munro and Dale Callander who, in front of Murrayfields' new pink wall, were presented with the winners silverware for the East Lothian Bonspiel.  This is the first time that Sandy has skipped a team to this title which in the past has been won by his father and grandfather.  Aberlady won the title with a shots up score of +14.
Our President Dave Munro led his Haddington side into second place with a score of +9.
I understand that Dave Munro, as a representative of the sponsor and as EL Province President was handing out the prizes and not just about to swoop on his daughters bottle of whisky. 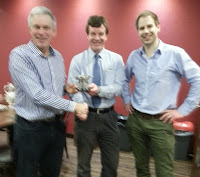 Congratulations are due to Athelstaneford who, helmed by Graeme Prentice and Johnnie Shedden, successfully defended the title which they won last season.  They are now the first club to have won this trophy twice.

The Haddington Pair of James Pate and Shelagh Main took the Low Road.


The Borders Province were too strong for us, on home ice, this year.

Let's hope for better luck (skill) when we take them on again in the Waldie Griffiths Competition.