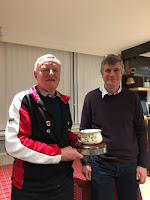 Our 4 teams clashed with the Borders Province for the battle over the Beverley Bowl aka The Chanty.  Borders Province, on home territory were looking to make it a hat trick of wins.  Our teams made a good start but the Borders made a stern fight back, taking a 4 in the final end of the final game.  Ultimately, they came up just short with the final tally of 23 - 22 in favour of East Lothian.
Ian Donald collected the trophy after a fine carvery meal.
Posted by Graeme at 02:52